Work
About
Resume
A new navigation experience
on seattle.gov
A redesign of the global navigation of the seattle.gov to achieve a more intuitive user experience for the residents of Seattle. This involved letting go of the department driven information architecture to follow a more audience-oriented mental model.
DETAILS
A project for the City of Seattle with the city's first UX team.
MY ROLE
Information architecture, prototyping, and usability testing.

THE PROBLEM
Identifying the root cause.
The seattle.gov homepage is visited by 77,300 residents every week on an average. According to usability studies conducted by the city in the last year, residents have reported experiencing fatigue and confusion looking for information on the city website.

Current experience: Department based navigation.
HYPOTHESIS
Structuring the navigation based on the mental model of the residents of Seattle will make it easier to find information and services on the city’s website and contribute to a good experience.
USER PERSONA
What makes a Seattle resident?
To rethink the taxonomy it was important to understand the resident’s mindset when they land on the website. Based on past research we know they came with a goal in mind and this goal differed based on the type of resident. To make sure we capture all needs we took a personified approach by consulting the personas previously created by the team for city residents.

Affinity mapping helped consolidate the information from our research and resulted in 8 high-level themes which were the foundational categories of the new navigation architecture. 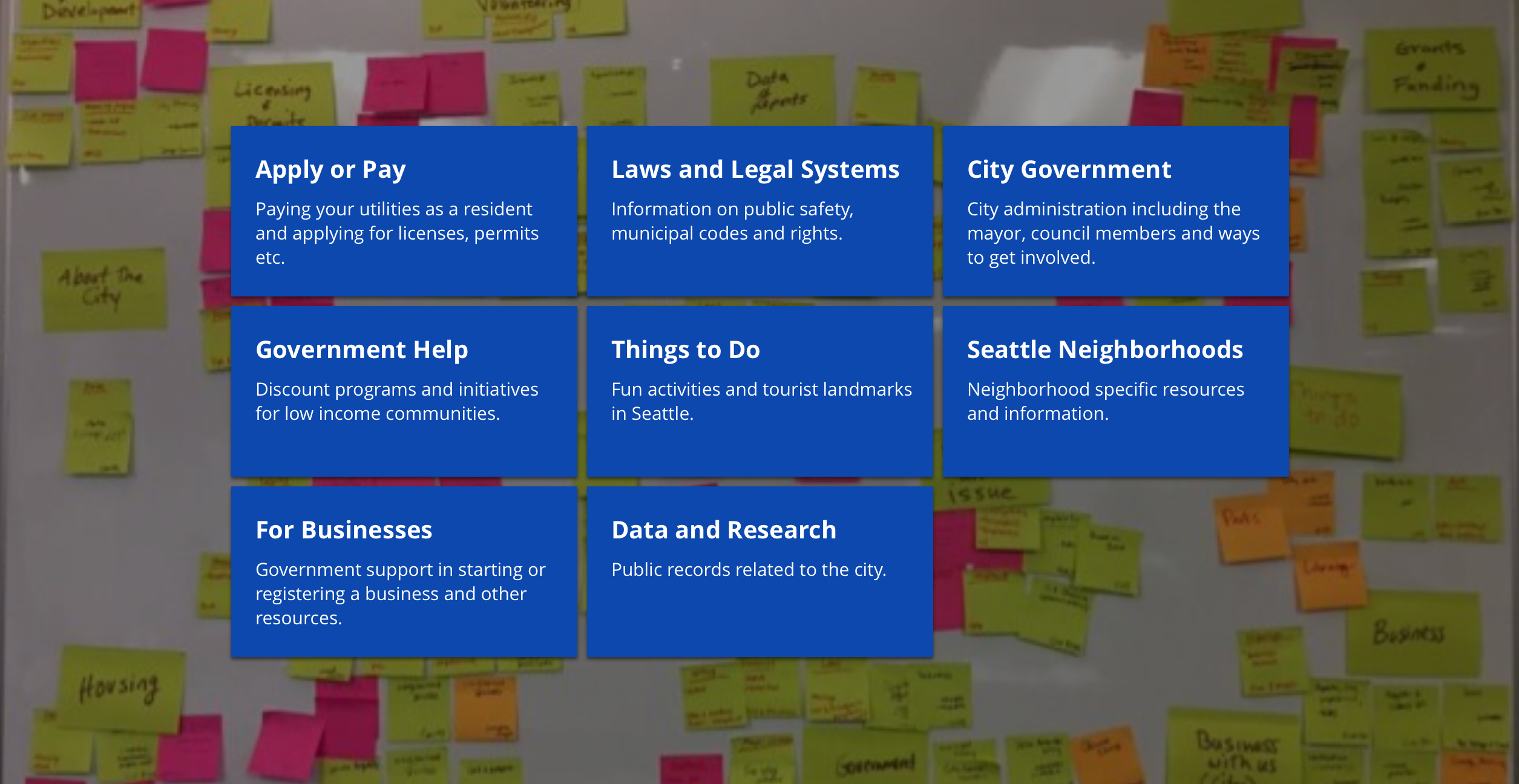 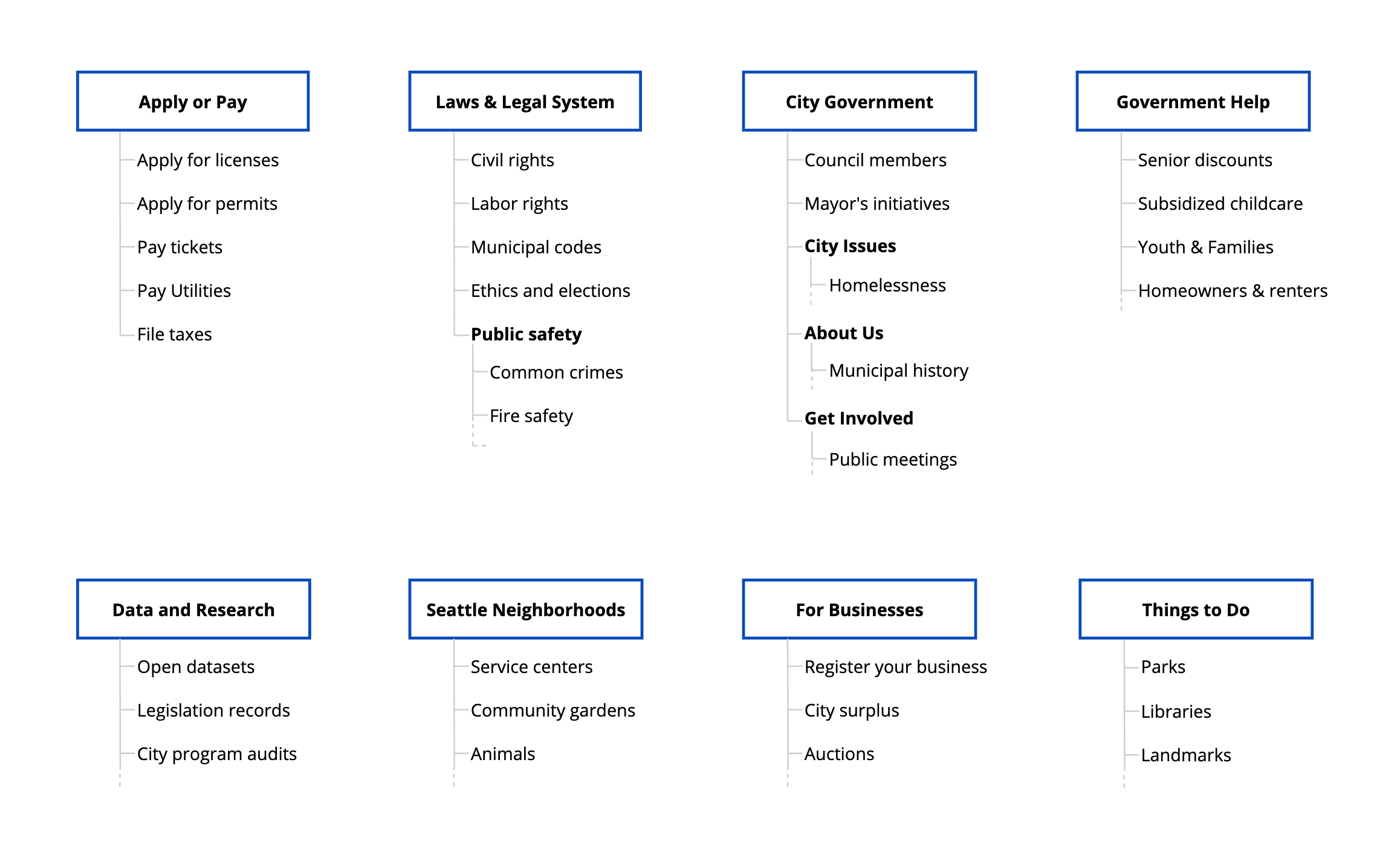 The first draft of the sitemap.
USABILITY TESTING
Putting the sitemap to the test.
Next, we tested if our sitemap accommodated the mental models that the residents have when they come to the city's website with a goal. We used Userlytics to perform unmoderated usability testing with participants from each of our persona segments.

Card sorting via Userlytics
My approach.
Before each exercise, I suggested we ask the participants what each category means to them and what they think they might find in that category. This helped us understand their assumptions about the terminology detached from any bias that our card sorting/prototype might put forward.
ITERATIONS
Changes after feedback. 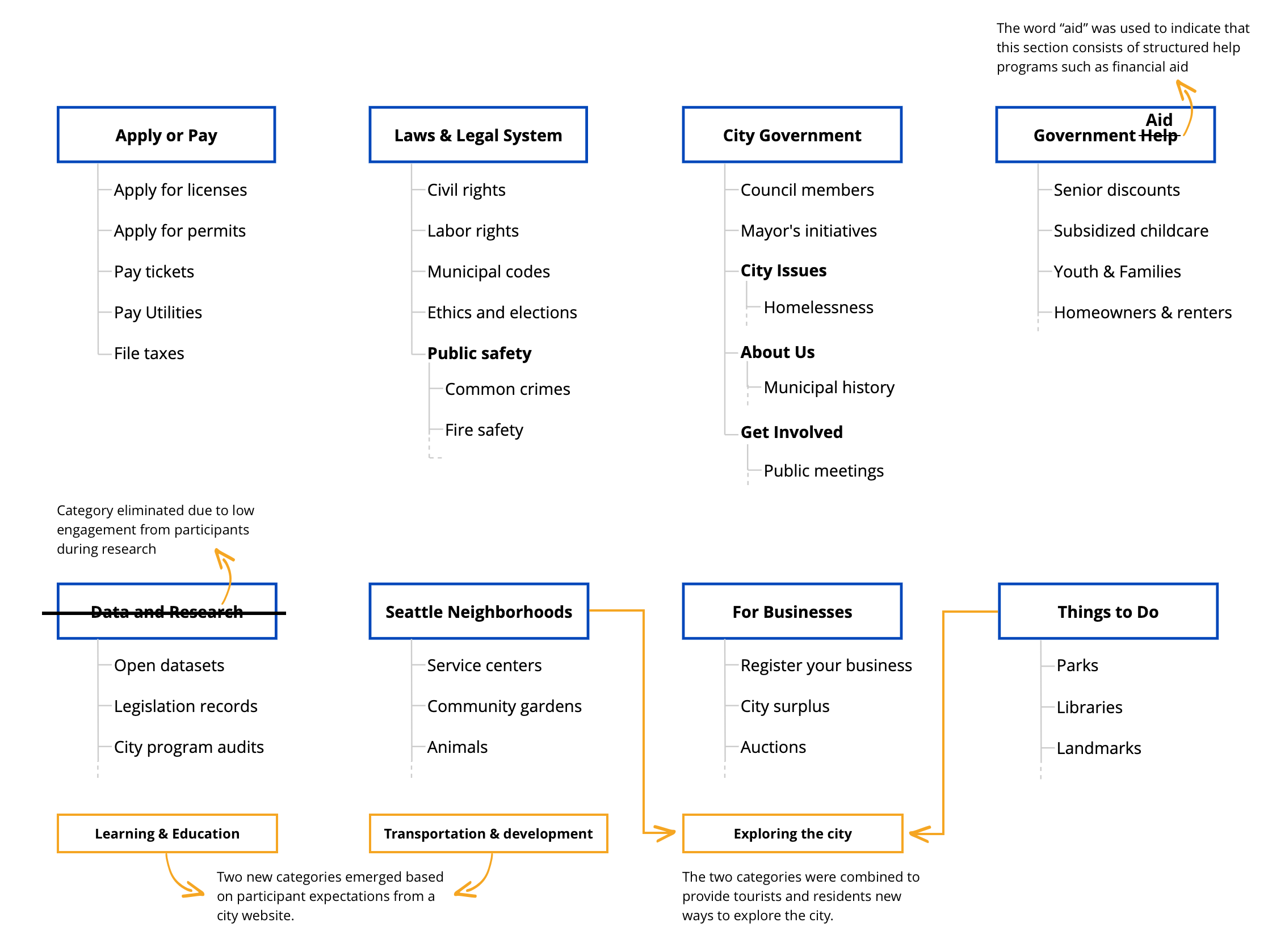 Highlights of changes after multiple rounds of usability testing.
CHALLENGE
By audience or by topic.
While categorizing, the “by audience” approach seemed more in alignment with the city personas. However, we often ran into a situation where a resident could identify with multiple audiences. Therefore, we decided to go further with the “by topic” navigation model while the “Information by audience” as a subcategory instead. 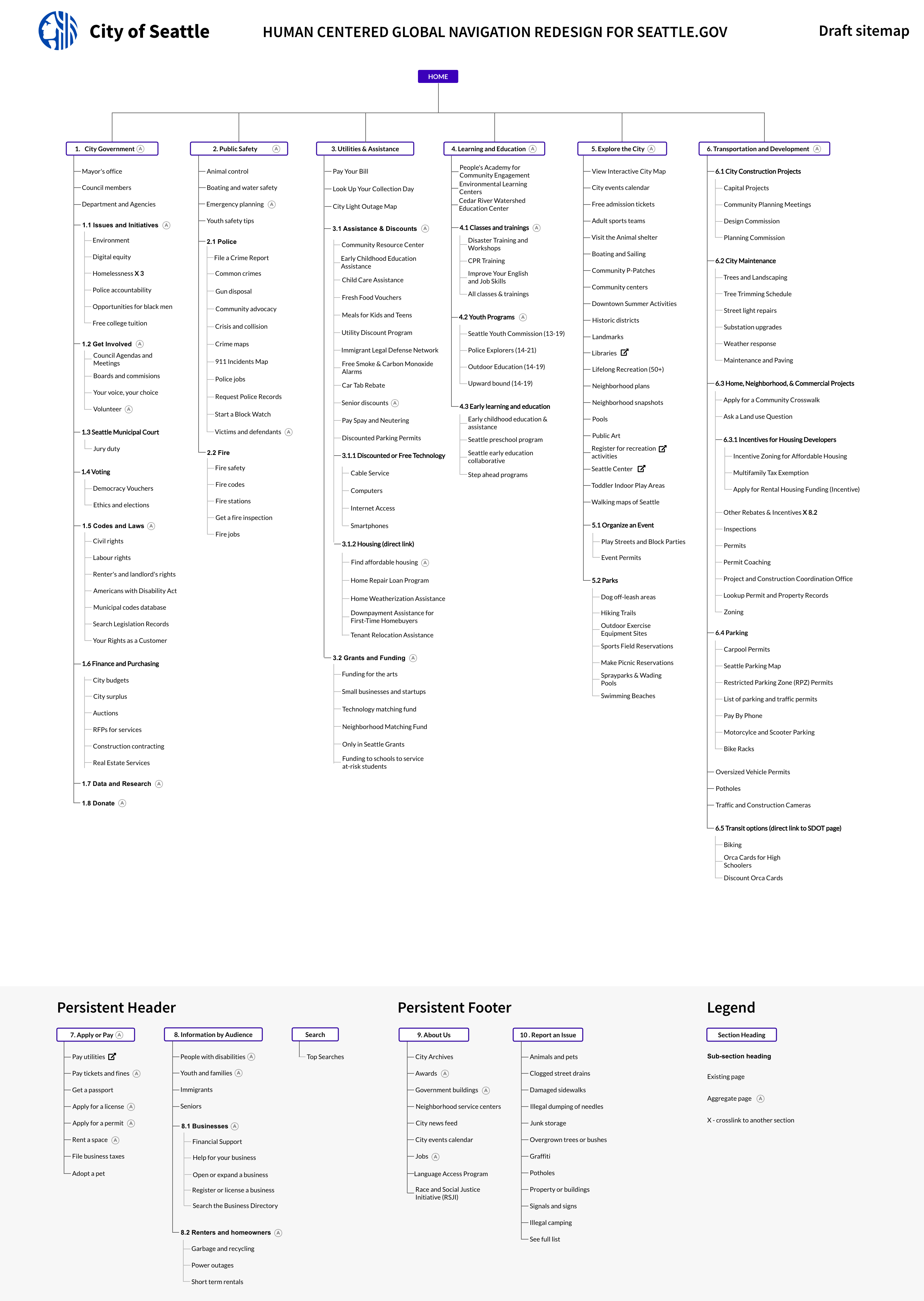 The latest sitemap for seattle.gov.
NEXT STEP
We had to incorporate the new and much larger sitemap on the website. We hoped to enable the residents to accomplish their goals without being overwhelmed by excessive choice.
IDEATION
Updating the website design.
Once we had a good hold on the taxonomy we started brainstorming ideas for appropriate navigation elements to improve the UI. We went through the first round of sketches to showcase our ideas and vote as a team. We concentrated on three key design areas in our sketches:

PROTOTYPING AND TESTING
Fleshing out the solution.
Next, we recruited residents that qualified as any of the city personas to try out the new navigation. We ensured that each persona was represented in the participants. We conducted 12 moderated in-person usability testing sessions. 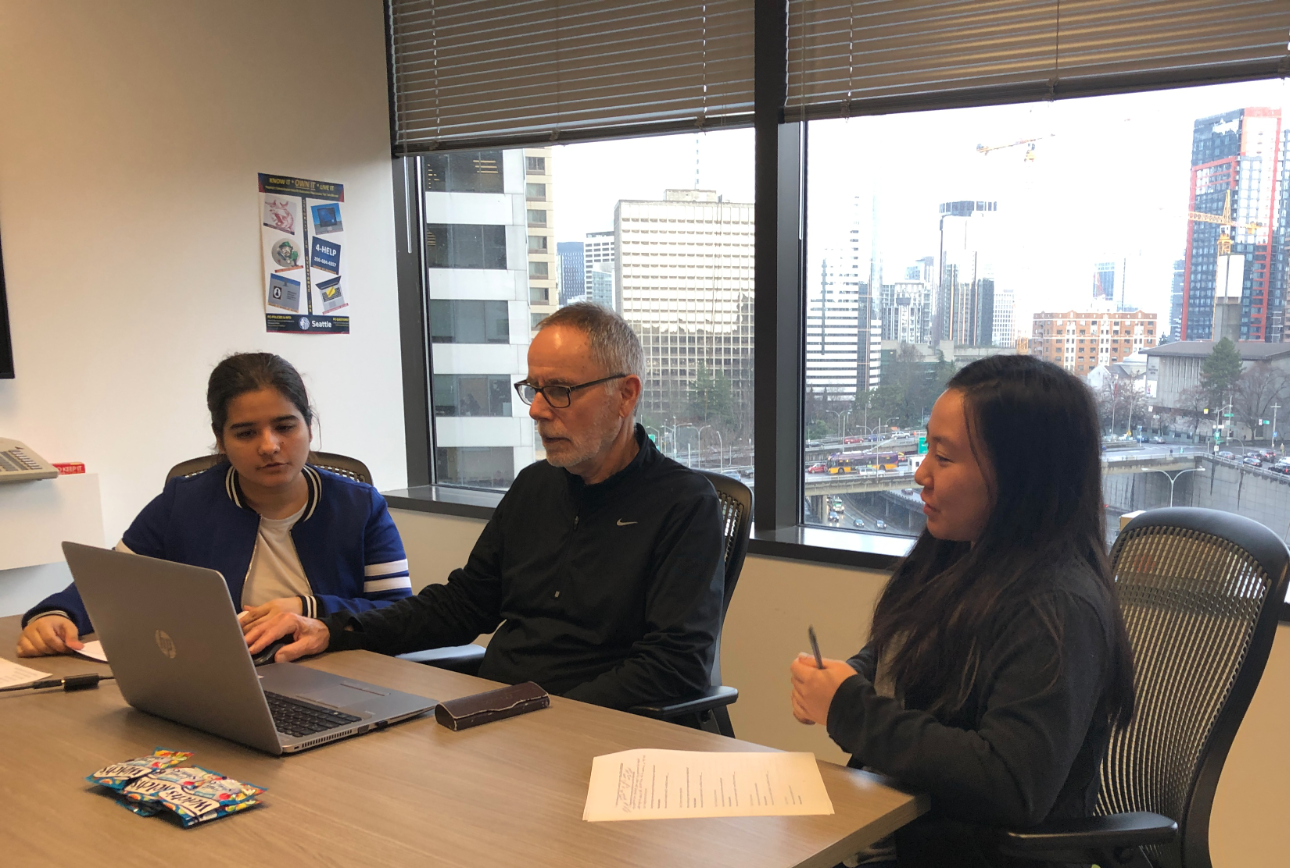 Usability testing session with a community advocate persona type.
NEW DESKTOP NAVIGATION
The mega menu is the primary navigation that houses the sitemap. Apply and pay, Information by audience are two categories with drop-down navigation outside of the mega menu.
MOBILE NAVIGATION
In the mobile view, the mega menu transforms into a nested hamburger menu with all eight categories.

UXpin prototype as handoff for implementation.
OUTCOME
A human-centered navigation.
The results of the usability testing showed a much more intuitive experience looking for information. After discussions with the departments and sharing the results the roadmap for the first implementation of the new redesign has been set.
Accessibility guidelines
A second goal for this project was to ensure all designed layouts are accessible as required for government websites. To that end, I created a set of accessibilty guidelines in the form of a checklist that can be used by designers & developers to ensure they are meeting the standards. This checklist is based on the WCAG 2.1 guidelines and is AA compliant.